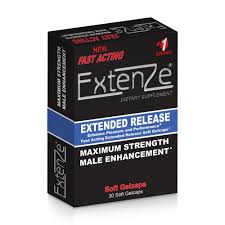 Extenze is a supplement for men to enhance their performance and it’s been around for the better part of two decades. The company behind ExtenZe is Biotab Nutraceuticals. which holds exclusive marketing rights. They do believe in their product. Sometimes too much because they have made far-fetched claims in the past that have landed the company in hot water.

Having sold over a billion ExtenZe capsules, they are trusted by thousands, but they aren’t without their problems.

The pills can be effective, in the same way, that most other all-natural supplements can be when taking over a prolonged time. Where they aren’t effective is penis enlargement in general, which the company has claimed in the past that taking ExtenZe regularly is scientifically proven to increase the penis size by up to 27%. That’s hype and it is what got the company fined $300,000 for making the claim.

The biggest class-action lawsuit they settled was estimated to be worth $6 million, and again, it was for deceptive advertising. Customers who bought ExtenZe between May 29th of 2005 and October 25th of 2010 were entitled to a full refund! Every customer for five years could have claimed their money back by filing for a refund through Extenzesettlement.com. Not every customer did or it would likely have wiped them out, but they’re still going strong nearly a decade later – without rebranding.

The point about knowing this is the industry for supplemental diet pills, male enhancement specifically, is extremely competitive and every brand is or has made speculative claims. You can’t always go with what a brand says their enhancement products do. You need to do your own research and decide if it’s worth looking past the previous misjudgments, which in the case of ExtenZe only relates to bad marketing. not a bad quality product!

A lot of claims are made about the ExtenZe capsules, but the reality is that they do what other enhancers for men do and that’s to help men improve blood flow and circulation using natural ingredients. It is the boost in blood flow to the penis that results in a bigger, firmer, and longer-lasting erection. ExtenZe will have no effect on the penis size when it’s not erect. For men looking for something that can keep you harder for longer, ExtenZe could be for you. 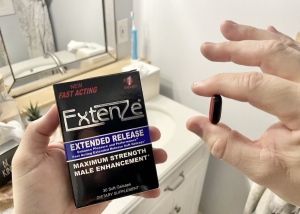 The ingredients found in ExtenZe include

As ExtenZe uses a proprietary blend, there’s no way to know the quantities of each ingredient. It should be noted that there at least two ingredients that are recognized as performance-enhancers and are therefore banned by pro sports associations making ExtenZe unsuitable for professional athletes.

On the plus side, by working in a proven natural performance enhancer into your daily routine, you will experience more energy in general, not just in the bedroom. Combine that with the aphrodisiac properties of some ingredients, you should find yourself in the mood more often, or able to get in the mood a lot easier and once you get going, you’ll, can keep going for longer.

Although there are no mentions of sildenafil on the official website, FDA lab analysis confirmed the use of the ingredient in the sample tested. For that reason, precaution should be taken if you have any health conditions as sildenafil can have some nasty side effects. There are health hazards associated with Sildenafil, which is why you should be cautious with products the FDA issues public notifications about any type of male enhancement supplement containing this. Another thing the FDA advises is to avoid products designed to improve sexual function in men that contain sulfoaildenafil, which is a variation of Sildenafil that was found in the Vigor-25 products.

There has been a Public Notification issued by the FDA about the findings of Sildenafil in their tests of ExtenZe.. For up to date information on safety issues, the FDA keeps an updated list of “Tainted Sexual Enhancement Products” here.

Sildenafil is the same active ingredient found in Viagra and while it is FDA approved, it’s only approved for use in prescription medication. Anyone with existing health conditions should get medical advice first before taking any male enhancement product with this ingredient in it.

If every ingredient in ExtenZe capsules were 100% natural, there would be very little adverse side effects, other than headaches if you were to take too many. However, given that the FDA has found the company to be including Sildenafil in the product, it raises the possibility of substance-induced side effects.

Possible side effects of taking ExtenZe include

Two components that increase estrogen, as well as testosterone, are pregnenolone and boron, so it is possible for testosterone to decrease when taking these.

How Long Until You Can Expect Results

Taken as a daily supplement, results should be noticeable within eight weeks. The recommended daily dosage is just one capsule daily, which is the least amount of any male enhancement pill on the market making it one of the most affordable brands. 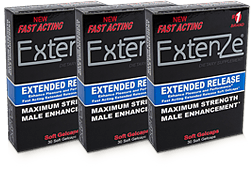 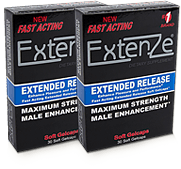 Chris Anderson is the editor-in-chief and head of marketing for Urban Reproductive Health. After receiving his bachelor’s degree from the University of Cincinnati, he spent 3 years as an analyst in the marketing industry working with health and wellness brands. When Chris isn’t working he spends his time with his 2 golden retrievers and wife Nancy.